How to Prevent Scorpions From Getting in Your House 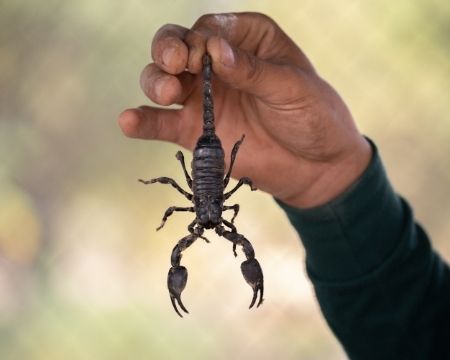 A yearly survey performed on homeowners reports that scorpions are among the scariest pests due to their sting and venom.
This dangerous pest is mostly seen in the Southwest part of America. They are pale gold or tan in color, come in different sizes but not longer than three inches. New homes suffer more from their invasion, especially when they are located on the outskirts of the town. Vegetation outskirt the city is normally their dwelling place and may wander into the home. Also, new development usually destroys their homes; in return, they start living in the new product.

Scorpions in the United States are in 90 species. All have a mild stink when they attack, except the Arizona bark scorpion. The Arizona scorpion venom is strong enough to kill a human. However, that mild sting of those scorpions hurts. Avoiding the sting is a better choice.

When you see a scorpion, be careful approaching it. If you desire to eliminate the pest yourself, then scoop it into an empty container and dispose of it far from your home. You can also wear some protective materials such as gloves and long sleeves. Call the pest control professional if you are scared of doing it.

An easy way to prevent them from entering your home does not exist. However, you can start by sealing your doors and windows, and other possible entrances. Inside your home, you can do a routine inspection of your home with a black light. When you shine the black light and notice a yellowish glow, it is a scorpion because that is how they look under the light. Carefully pick the pest with a vacuum or aerosol once you confirm it is a scorpion.

Scorpions are sneaky and can hide under any container that provides a cover for them. This pest mostly invades the home through tiny openings around your doors, covering such spaces with leather stripping. This dangerous pest also comes in through cracks on the wall because they are good climbers. Use pipes and wires to block such cracks. Dispose of the soil that attracts these pests. Regular cleaning will eliminate any possible dwelling of scorpions in your home. You can also clean your surroundings to get rid of potential habitats such as trash, boards, firewood, and rocks. This pest is most prevalent during the beginning of spring, using exclusion to get rid of scorpions during the fall or winter months.

Scorpions are fond of hiding in shoes, so be careful when you leave your shoe outdoors. If you intend on putting them back on, take time to inspect the shoe before usage. Shake your laundry before wearing them. And remember to put on shoes in and outside the home to prevent stings.

Some insecticides are more effective on scorpions, especially during the springs and summer months. Insecticides such as liquid or dust form of Ultracap 9.7 or a wettable formula dissolve in water like Cipher WSP or Demon WP. This solution is harsh on these pests. You can also use D-Fence Dust. Insect glue is another method to trap these pests on baseboards. Call us for help on scorpion removal in your Arizona home.