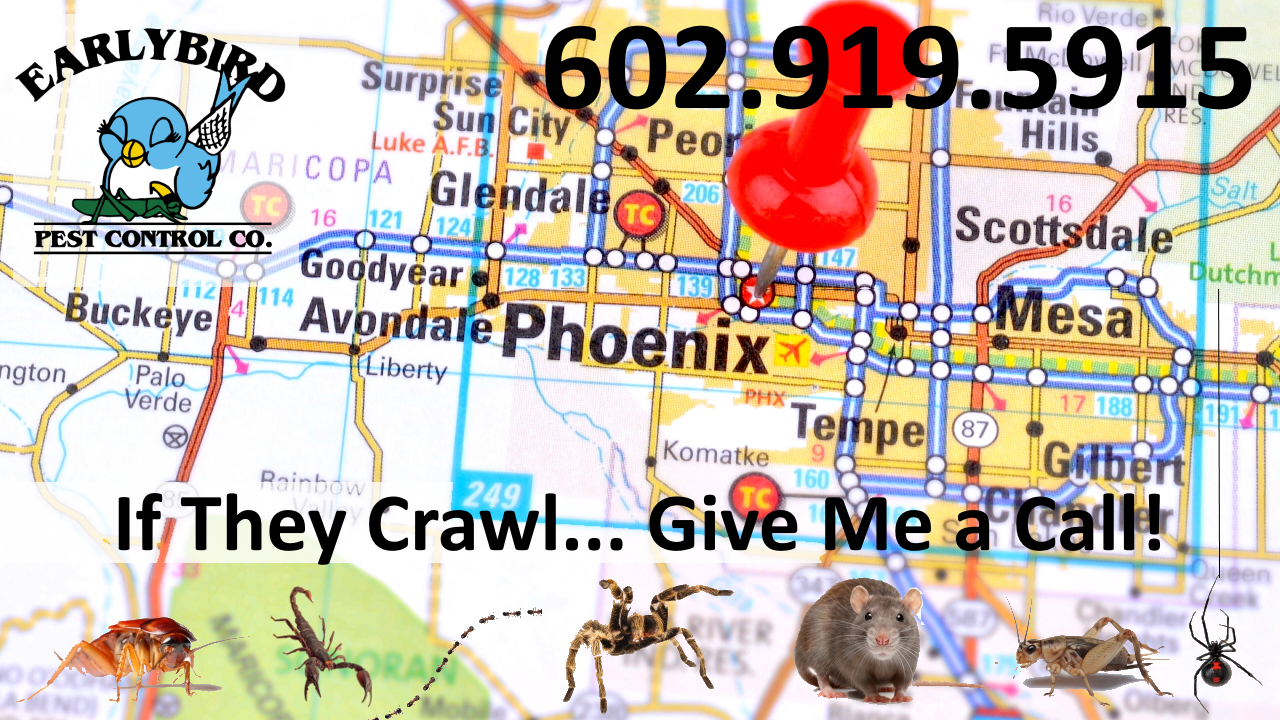 Well, Avondale Arizona is in the desert and we took over their natural habitat.  Avondale and surrounding Phoenix West Valley Communities of Goodyear, Buckeye, Verrado and Litchfield Park have an abundance of Arizona desert pests including scorpions, cockroaches,  ants, and spiders, to bedbugs, bees, wasps and hornets. Then there’s the pesky rodents…  rats, mice , gophers, roof rats, and pack rats!

If you are tired of creepy-crawly pests invading your Avondale or Phoenix West Valley area home or business property in the Phoenix Arizona Valley Give me a call at 602-919-5915.  With more than 23+ years of experience as a pest control exterminator in Maricopa County and the Phoenix  WestValley including Avondale, AZ.

In the above video Early Bird Pest Control Owner Henry talks about scorpion pest control and the Arizona Bark Scorpion in Avondale and Goodyear in the Phoenix West Valley.

Thanks for visiting our Avondale Arizona pest control and exterminator page and remember – If it Crawls… Give Me a Call!   602-919-5915.

Serving Verrado, Buckeye and the Phoenix West Valley for 23 + Years 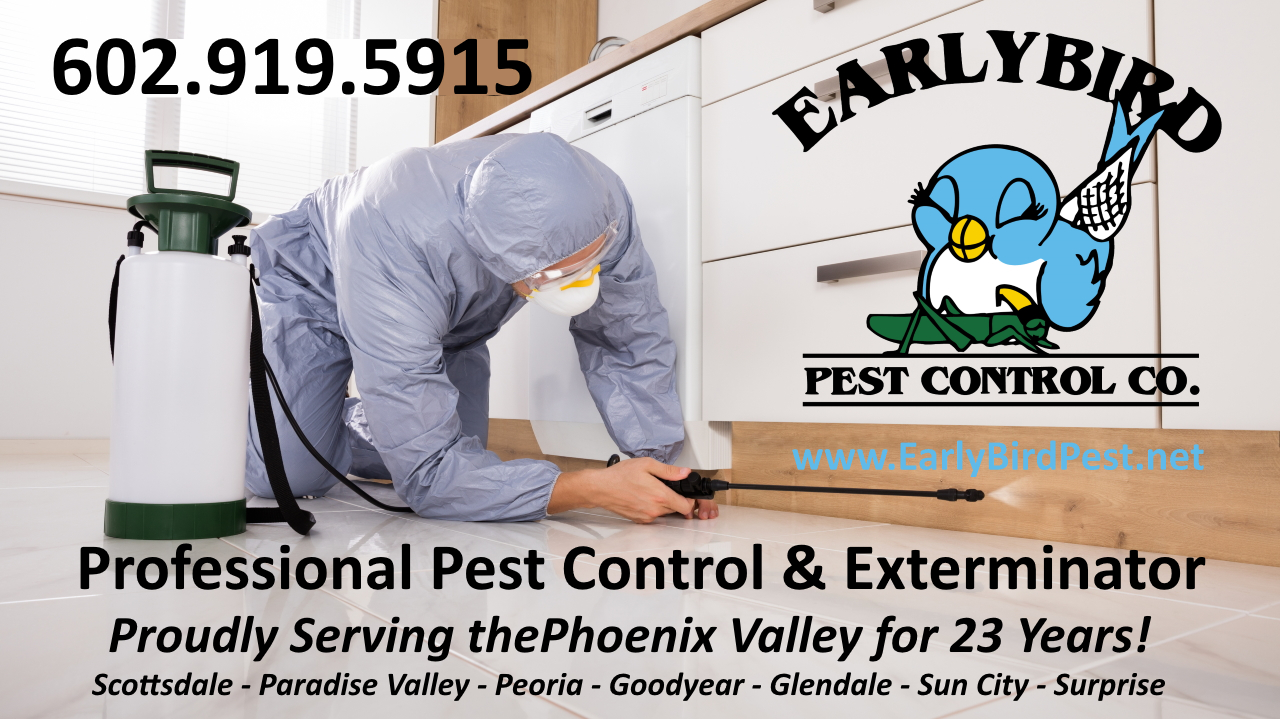 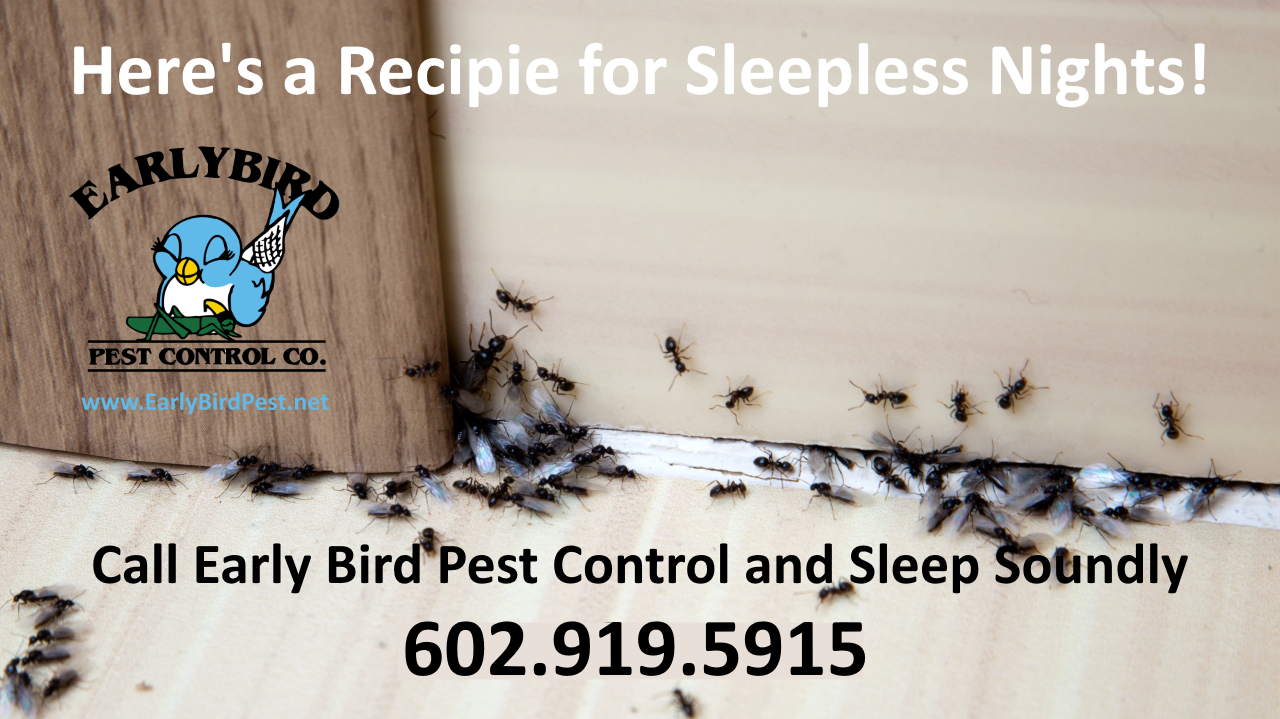 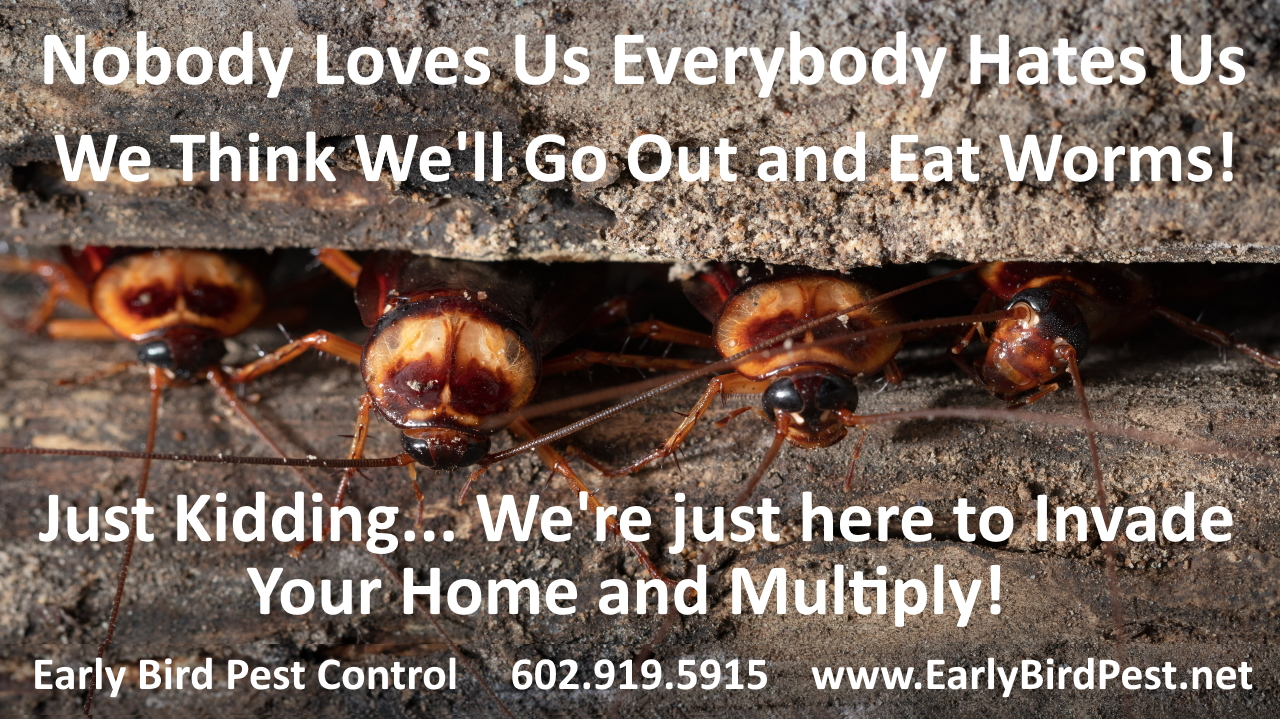 Got Scorpions in Avondale AZ? 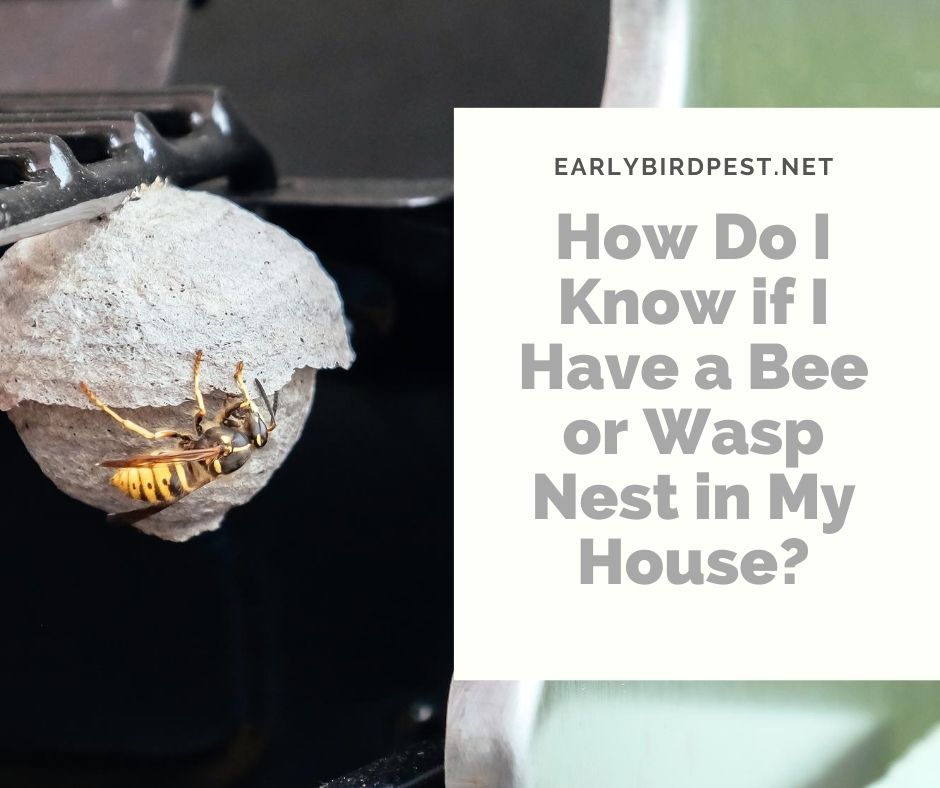 Early Bird Pest Control offers beehive removal and bee pest control for hornets and wasps. We can remove and relocate the beehive from your Avondale, Arizona property

Avondale is a city in the Phoenix West Valley about 20 minutes West of Phoenix Arizona and about 25-minute drive from Phoenix Sky Harbor Airport in Maricopa County.     The population of Avondale Arizona in 2020 is estimated at 92,363 according to the US Census Bureau making Avondale the 13th largest city in Arizona. The city of Avondale is currently growing at rate of 2.46% annually.

Avondale was founded by William “Billy” G. Moore who arrived in Avondale Arizona in the late 1860’s, settling near the Aqua Fria River, he named the original settlement Coldwater Arizona. He bought land, set up a stagecoach stop and built a saloon and a general store. Billy was also the postmaster of Coldwater from 1901 until 1905.  The name was eventually changed to Avondale and the City of Avondale was incorporated in 1946.

Avondale is also home to the Phoenix Raceway where NASCAR holds its Sprint Cup Series Races in March and November here in Avondale.

If you have a Rat Problem, We have a Rat Solution! Serving Avondale AZ for 23 Years! 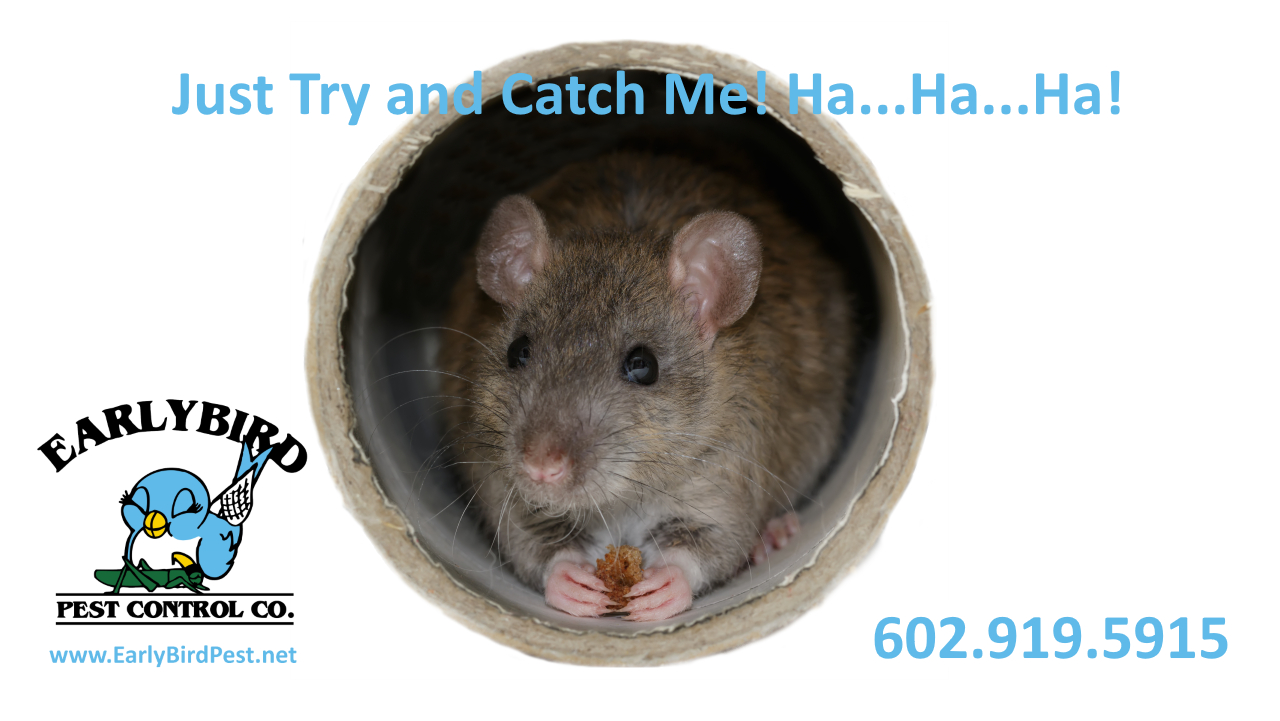 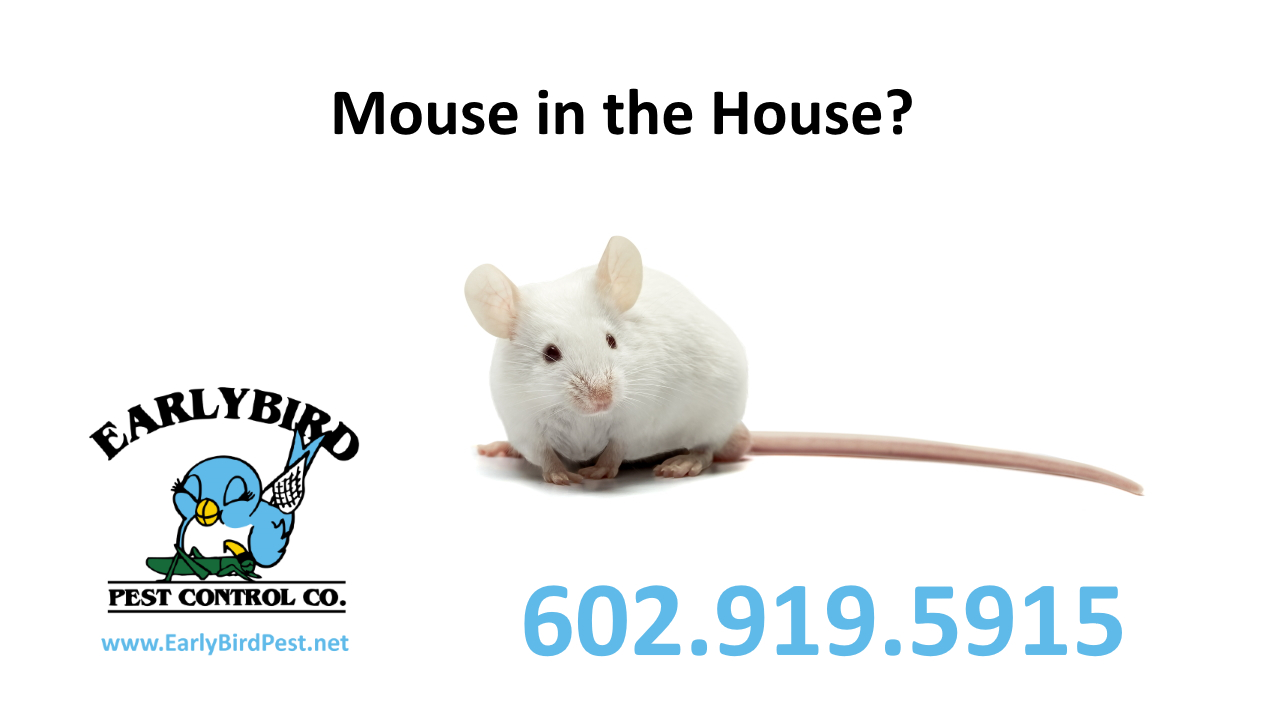 If You’ve Got A Pest… Better Call the BEST! 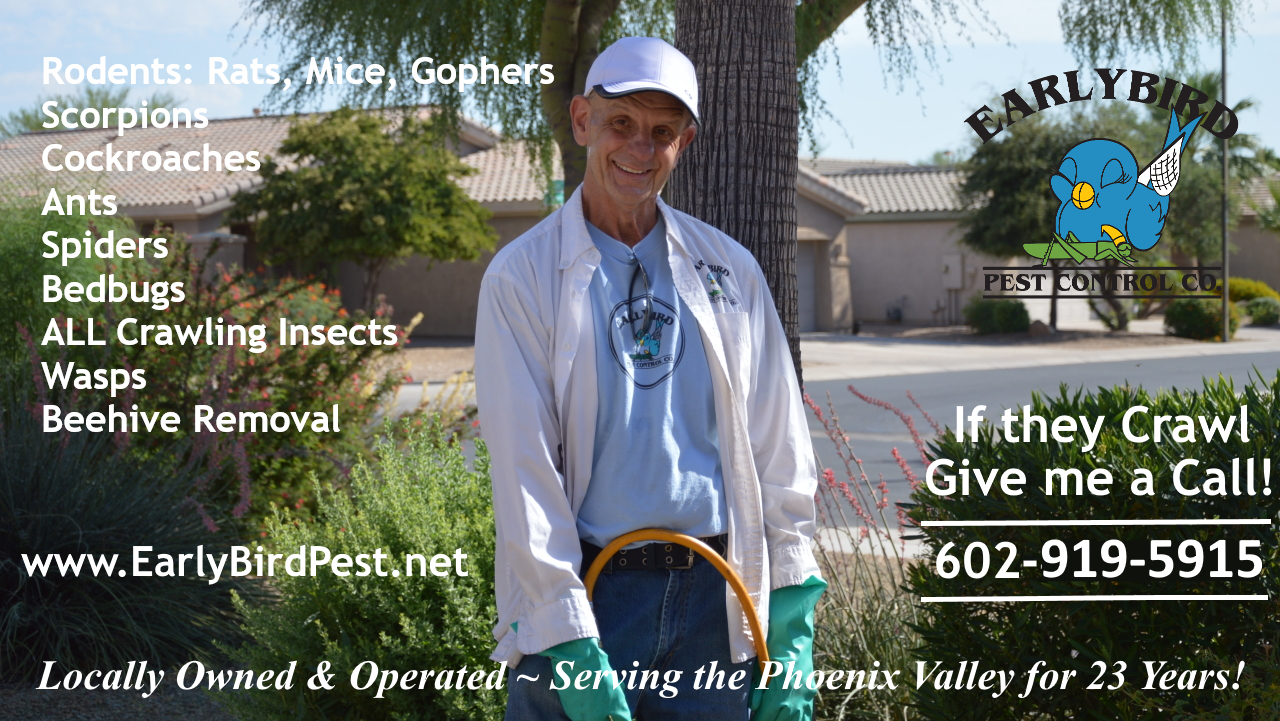 What Not to Do When You Notice Pests on Your Property

If you have experienced pest infestation, you'll know it is bothering your home with pests seemingly taking over. Pest infestations need pest control to get rid of them. Pests such as roaches, mice, rodents, termites, scorpions, ants, and spiders are common pests that...
Read More

Best Time of Year for Pest Control in Arizona

Winter Pests to Look Out for in Arizona

Pests are not welcome in the home at any time of the season. Many homeowners think the dropping temperature means a decline in pest activities but that's only partially true as winter pests emerge. Many pests function in the winter in Arizona. These pests invade many...
Read More

When It’s Time to Call a Professional Exterminator

Homeowners should have a good relationship with an exterminator because, whether large or small, pest infestation needs immediate attention. However, only a few can afford the budget, and based on other reasons, DIY has become the reachable method. But a more profound...
Read More

How to Avoid Stink Bugs in Arizona

Arizona is a beautiful destination that attracts everyone, including the family of stink bugs. These bugs are stinky brown bugs crawling into Arizona residents' homes. They plan to have a winter camp in a cozy, warm, and hidden place in your home called diapause. The...
Read More

How to Winterize Your Arizona Home Against Winter Pests

If you call Arizona home, it might be time to winterize your home to help eliminate pests. Winter is a beautiful time of the year when we experience plunging temperatures, beautiful coloring plants, dwindling sunlight, and warmth. Warm places become the hideout places...
Read More

How Often Do I Need Pest Control Professionals

The truth is that pest control services are done based on your property, the type of pest, and other conditions. If you require the help of professional service, then quarterly services are generally sufficient to keep the pest at bay, however, a consultation...
Read More

Is an Exterminator and Pest Control the Same Thing

Pests are our friends though we don't get along so well. They are important to the environment; spider webs help catch mosquitoes and flies, and ants feed on decaying mattes. Pests add nutrients to the ecosystem but are pesky in our homes. They can be dangerous,...
Read More

Landscape fabrics are a great way to eliminate pulling weeds in the garden, allowing you to enjoy gardening vs. dread it. To reduce this tedious process, you can mitigate the growth of garden weeds in many ways, and weed mats are a well-known method. Weed mats are...
Read More

6 Plants That Repel Mosquitoes and Bees

Many homeowners and renters want to repel mosquitoes and bees. Mosquitoes and bees can become a disturbance in the home, especially for those allergic to them. These insects can cause much damage to the house and humans. In addition, a bee sting or mosquito bite can...
Read More