What Happens When There are Too Many Gophers? 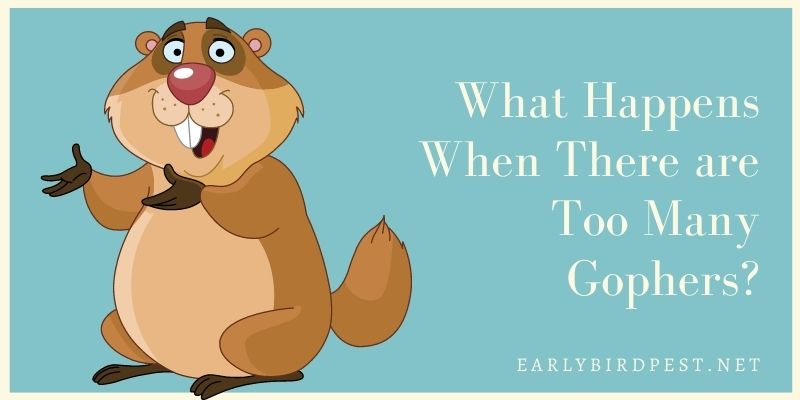 A single gopher can act solitarily, without the efforts of others to create damage of monumental impact. But beyond this, a gopher has a procreation process that ensures the birth of three to four young ones per delivery, once or twice in a year. Within five weeks, the young ones are allowed to go independently. This could lead to the presence of many gophers in and around your house. However, you would rarely see many of them except during breeding, or when the females are rending their young.

What Happens If There Are Too Many Gophers?

You rarely see gophers live above the ground, they live under the ground. The holes they create could be about six to twelve inches underground. A single one can cover hundreds of square feet with tunnels consisting of lateral branches for feeding.

Gophers could increase in numbers rapidly, as a result of breeding, causing so many of their holes in and around your house. Before long, they create a nuisance out of your home and become that disturbance that you never envisage.

You can also find many of them around your home if your garden or yard offers them foods to eat. They eat the bark of trees, and plants from the roots, making it difficult to detect them, not until the damage is done. But if the sand around your home is such that they can dig easily, then, you get to see them on the surface. For instance, due to the potential for caving-in, and the fact that it does not insulate them from extreme temperatures, they will likely seek other ‘comfortable’ places.

Also, if you live in woodland, grassy areas, coastal regions, or mountainous areas, your home may be prone to them. Gopher’s infestation may start off with just one, destroying your garden, or even underground infrastructures. With just that one, several damages to your home will be visible. And because it does not stop attacking these structures, in a long term, they may become weak. With many gophers, there is a bigger threat to your infrastructures. By digging holes under the ground right into the foundation of the structures, the structures may become extremely weak and may be subject to collapse.

They could also create a big problem for you when they begin to interfere with your utility cables. This could cause so much economic loss when you consider the cost required to get a replacement.

More: Can Gophers Destroy Your Home?

Gophers are also known to carry deadly diseases. Diseases such as Hantavirus and Monkeypox are found in gophers. So when there are too many gophers around, they can easily transmit these diseases. Although, you may not stand the risk of being directly infected, because, you do not often come in contact with them. However, they may become a threat to outdoor pets by transmitting fleas and ticks to them.

To prevent the continuous spread and activities of gophers around your home, ensure that you take considerable measures by fumigating your surroundings. If their activities persist, contact a professional pest controller to save your home from gophers.

Schedule a Consultation on Gopher Removal